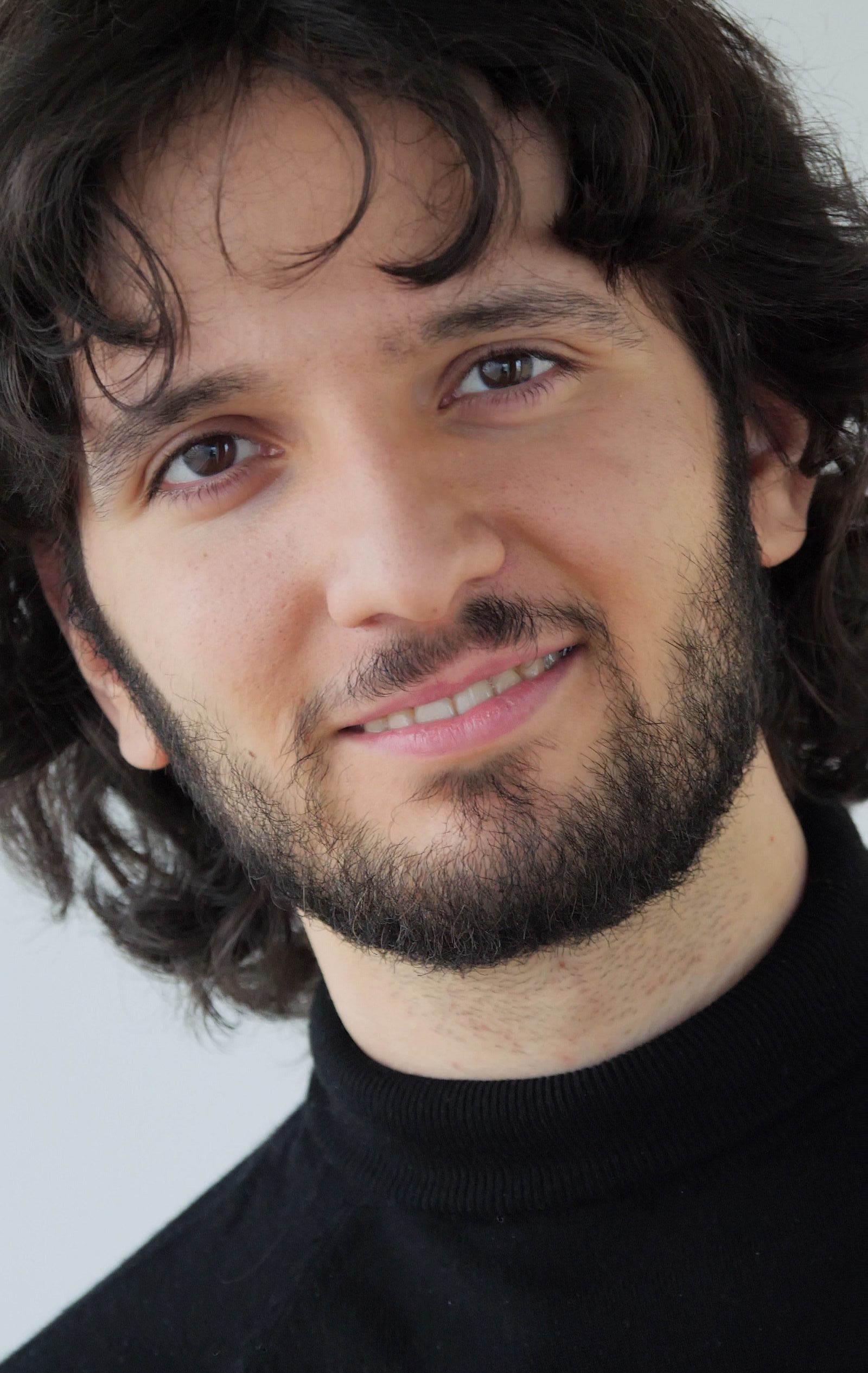 Spanish composer and pianist, born in Sagunto. He begins his pianistic training at the age of three, in the school Música Temprana in Valencia, with professor Jesús García. At age thirteen he continues his studies with the Spanish pianist Cristina Casale, and with French pianist Emmanuel Ferrer-Laloë, professor at Musikene Conservatory. In May 2018, Jorge completes his Bachelors of Music, graduating with honors with a double-major in composition and piano, and with a merit scholarship from Mannes School of Music – The New School, in New York City, having studied with the American composer Lowell Liebermann, and Russian pianist Irina Morozova.

In April 2018, Jorge was awarded one of the most prestigious scholarships in Spain: The Excellence Scholarship of the “Fundación Rafael del Pino“, to pursue his double-master in Mannes School of Music, New York, with Liebermann and Morozova. He was also awarded with a “President Scholarship” from Mannes for his double-master. In 2020 he graduates from his double master in composition and piano having been granted the Steinway Award, which is given to pianists that demonstrate artistic excellence. In 2022 he was awarded a scholarship at Rutgers University to pursue a double doctorate in composition and piano with Robert Aldridge and Min Kwon. This same year Jorge has been appointed Composer in Residence by the Accord Symphony Orchestra, in Washington DC, directed by Juan Gallastegui.

His performances and compositions have been broadcasted on WQXR in New York, on the BBC Radio 3, in London, on National Spanish Radio, RNE Radio Nacional de España, on CatMúsica in Cataluña Radio, on National Cuban Radio, CMBF Radio Musical Nacional de Cuba and by LRT Lithuanian National Television and Radio.

In June 2020, Jorge Tabarés releases his debut album with the recording label KNS Classical. The CD is titled “Tribute to Alicia”, in homage to the great Spanish pianist Alicia de Larrocha, and it includes some of her own compositions from her collection “Sins of Youth.” Recently the CD has received 4 awards at the Music and Stars Awards: Gold Star for Best Piano Solo CD, Gold Star for Best CD Concept, Gold Star for Best Sound Editing, and Silver Star for Best Cover.

Jorge Tabarés has been selected in several occasions by the music critic Robert Sherman to be broadcasted on WQXR in New York, for «The McGraw Hill Financial Young Artist Showcase» in 2015, 2016, 2018, 2019, 2020 and 2022. In April of 2022, Robert Sherman dedicated an entire radio program in WQXR to Jorge’s own compositions and performances, including the radio premiere of his Sonata for Viola and Piano. In spring 2019, Jorge was selected as invited artist to be broadcasted in WQXR where he performed an entire program of Spanish music in homage to the great pianist Alicia de Larrocha. The program included works by Alicia de Larrocha herself, which were also radio premieres in the United States. This homage was curated by Alicia Torra de Larrocha, (De Larrocha’s daughter), and Robert Sherman, and the project was the genesis of his subsequent album debut.

Stands out his participation as composer and pianist in the I Iturbi Festival 2020, for which he has done a 10 piano arrangement of 6 orchestral works by Bernstein, Tchaikovsky, Mendelssohn, Liszt, and Falla. He performed these arrangements together with 9 other pianists at the inaugural concert of the Festival. Also stands out his solo recital in the inaugural concert of the XXXVII edition of the Sagunt a Escena Festival, in which apart from offering a solo piano program, he also composed and premiered his Song Cycle on Poems by Rubén Darío for the occasion. He has also participated as an invited solo artist to perform in numerous other Festivals, such as the Serenates Festival 2020, Porto PianoFest 2020, or the XX edition of the “Festival de Música Sant Pere de Rodes.”

As a soloist, stands out his debut in the modernist Concert Hall of the Palau de la Música Catalana, in September 2020, as part of the «El Primer Palau» concert series, in which he performed his own compositions among other pieces. As an orchestral soloist, stands out his debut with the Philharmonic Orchestra of the University of Valencia, with conductor Beatriz Fernández, at the Iturbi Hall of the Palau de la Música de Valencia, Mozart Hall of the Auditorio de Zaragoza, and Teatro Serrano de Gandía. Also stands out his debut with the Vienna International Orchestra, conducted by Robert Lehrbaumer at the
Gemeindezentrum Halbturn, in Vienna, Austria. He has also performed in different Spanish cities, and in an international level in Austria, France, Italy, Portugal, England, Germany, Canada and the United States.

As a composer, stands out the recent performance at Le Poisson Rouge, New York, by the “Helix!” ensemble of Jorge’s work Two Hispanic Dances which
were conducted by Kynan Johns in November 2022. Also, his work «Two Preludes for Orchestra» and «Two Hispanic Dances for Orchestra» was recently premiered by the DC Strings Orchestra in Washington DC under the direction of Juan Gallastegui. Moreover, Jorge’s Prelude No.5 was performed in September 2022 in Vienna, at the Palais Pálffy by the Japanese pianist Masumi Hio, at a concert organized by the Austrian mezzosoprano Angelika Kirchschlager. Also stands out the premiere in 2018, of his Sonata for two Pianos and Percussion at the Percufest Festival, Valencia, Spain, by the pianists Josu de Solaun Soto and Anna Petrova, and the percussionists of the Tenerife and Valencia Philharmonic Orchestras, Paco Diaz and Josep Furió. This work was commissioned by Percufest itself. Also stands out the premiere of his Prelude No.4, from his collection 5 Preludes for Piano, performed by himself at the Mozart Hall of the Auditorio de Zaragoza in 2019. In 2018, Jorge Tabarés wrote his Trio for Strings for the “European Literature Night” which was premiered at the Bohemian National Hall, NYC. Such event was a collaboration between the Delegation of the European Union to the United Nations and Mannes School of Music. Also stands out the recent premiere of his Hispanic Dances for Violin and Piano, in December 2020, at the Eutherpe Foundation in León, Spain. He dedicated the work to this same Foundation. Other of his works for chamber ensembles and for piano have been performed by musicians of international acclaim, in numerous cities of Spain, such as Madrid, Barcelona, Valencia, León, Zaragoza and Murcia, and in an international level, in different recital halls of the United States.

In an international level, Jorge has participated in the following music programs:

Hi friends. Here’s a second excerpt of the music

Very excited to share that my Prelude No.5 was per

With @benjamintyt after the second and final recor

I couldn’t be more excited to share that this ye

Here’s another little fragment of the 2nd song o

Love to share this fragment of another song from m

Hi friends, this comes a bit late, but I finally u

It was a privilege to play my own compositions thi

It’s been a while, but I never got to share the

This happened almost a month ago, 😅 but here ar

A few photos of my trip to Washington on Friday wh

Hi friends, this comes a bit late, but tomorrow @j

Hi friends! I'd love to share this performance wit

Hi friends, this comes a bit late, but a month ago

I’m very excited to share that two days ago, on

Hi friends! Just wanted to share with all of you t

Just uploaded the 1st movement of the Spanish Sona

Just uploaded this performance from a while ago of

Hi friends! I just got myself to finally upload a

Hi friends, I’m very happy to share that I have